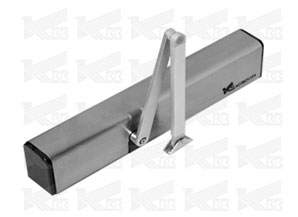 KP1000 is a Brand-new swing door operator which launched by KBB Group in 2014 ,it’s briefly in design and self-monitoring, also possesses kinds of multiple and additional functions, which could easily meet the requirements of the obstacle free passageway and fire protection design from the modern buildings, and widely used in many places such as office, meeting room, medical treatment room, workshop etc..

KP1000 is a kind of intelligent swing door Operator, during the running time, the microprocessor measure the door’s current position, speed and final position, after accurate calculation, then could get the most suitable movement method to control the moving path of each door. This could prevent the well-known problems of terminal point stop, emergency braking and sluggish speed etc. According to the door width, when power off, it could set spring tensile force of pulling open, and limited redundant force control could also increase safety level.

B. Collision detection. When something blocks the door’s openning, the door stops immediately. Drive system tries to get to open position during buffering period. When buffering period finish, door closes. When door opens next time, it moves slowly until previous block position to avoid collision.

C. Reopen as block. Door reopens when it is blocked in closing process.

Operator shall function as a manual door closer in the direction of swing with or without electric power.

KP1000 will works automatically with the help of radar or other ACS .

We can push the door leaf with only little force, then the door will open automatically .

Our operator could connect with many types of ACS, such as card reader system, fingerprint identification system etc.